Chamber award-winner ahead of the times

While doing business virtually has been gaining acceptance throughout the years, the current COVID-19 pandemic has rapidly accelerated the adoption of using technology such as Zoom, GoToMeeting, Google Docs and electronic signatures to make it easier to do business remotely.

Using that technology successfully to create and maintain a viable virtual company can be a challenge, unless the firm already has years of experience.

The Worthington Area Chamber of Commerce has selected a local businessman who is a pioneer, thought leader and creator of a successful virtual company. Peter Macrae of Macrae Architecture has been named the Chamber’s 2020 Small Business Person of the Year. 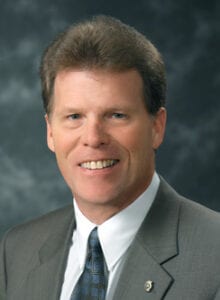 After the 2008 recession affected many companies, Macrae saw a way to make technology work for the next step of his career.

“In 2011, I was president and partner of an architecture firm in Westerville,” said Macrae. “Because of the great recession, I watched our firm decline from 20 people in 2007 to six people. I knew it was time for the next step in my career. I knew I wanted to start my own firm. I noticed that the way we were doing business was slowly changing. We were delivering services to our clients digitally and using all electronic files.”

That evolution of service inspired an “a-ha” moment for Macrae.

“If this is the way we are delivering services,” he said, “I determined it must be possible to have a national architectural firm with zero overhead, no equipment (everything is on the cloud and paperless), no employees, no payroll, no rent for a physical location. So that is the company I created.”

Macrae invested his time to create a virtual team of collaborators.

“I mentored all of the people who were going to collaborate with me on projects to form their own companies,” he said. “I subcontract to them so they are all 1099 contractors and it works beautifully.”

This concept of having a virtual team that can be comprised of people throughout the world gives Macrae the flexibility of choosing those who best meet his company’s needs.

“I form my teams according to the unique requirements of each project,” he said. “I don’t assign people just because they are on the payroll. I identify the talent profiles and I reach into my pool of available collaborators and I send them the scope of work.

“They send me a proposal, we negotiate and then sign contracts. The next project may be a different team. The client gets role fulfillment experts.”

As his business grew, so did his virtual collaborative team.

“In nearly a decade, we have grown to six teams. Four of these teams serve national restaurant accounts, the fifth team works on high-end, corporate interiors for a large international conglomerate out of Australia and the sixth team does one-of-a-kind projects.”

“The first five teams are located in four states and five cities,” Macrae explained. “I manage the sixth team because it is the kind of work I really enjoy and have fun with. We are currently working on a Buddhist temple in Franklinton here in Columbus.”

“I’ve never had a problem finding staff since the day I went virtual,” said Macrae. “People have reached out to me wanting to participate in this virtual work. And this virtual model has addressed several of the issues that have plagued the field – gender equality, pay equality, work-life balance and presenting an alternate career path for young professionals – that of a new path to self-employment.”

“Hopefully, I can help my industry embrace the virtual architectural model so the industry will now be open to this and other viable practice options,” Macrae said.

Macrae, who has been in the architecture business for 43 years, is licensed in 38 states, he said..

He has participated in four international architecture projects from his home in Worthington.

Macrae, appropriately enough, was scheduled to be honored July 30 by the chamber with a virtual online ceremony, when he was to receive commendations from public officials and share recommendations on running a business virtually using technology.

“I am honored to receive this award,” said Macrae. “And it makes sense that I receive it as more and more people are turning to technology to do business.”

Macrae, who will be 68 years old in November, doesn’t have any plans to retire.

“Architects rarely retire, because we love what we do,” he said. “And we can continue to do it especially if you set yourself up to be able to do it when and wherever you choose. So I doubt I will ever retire. Especially if life goes the way it is going now.

“I really don’t work that hard,” he said with a smile.

Initiated in 1987, the chamber’s award is one way the organization demonstrates its support for small businesses and honors members who are succeeding, growing and are involved in the community.

Nature moves to beat of its own drum