The group was joined by members of the VFW Post 2398, the American Legion Post 239 and Matt Lofy, director of the Worthington Area Chamber of Commerce, to place ceremonial wreaths representing branches of the military.

Color Guard was provided by Scouts of BSA Troop 268. Bonnie Michael, president of Worthington City Council, spoke and read a proclamation from the mayor.

Volunteers gather at the Circle of Honor, covered with wreaths, at Walnut Grove Cemetery. (Submitted photo)

Members of Worthington DAR were joined by several members of Anne Simpson Davis Chapter, DAR, Whetstone Chapter DAR along with Franklinton Chapter DAR as well as community volunteers to place wreaths at Walnut Grove Cemetery and Flint Road cemetery. The ceremonial wreaths were placed at the Circle of Honor at Walnut Grove Cemetery. More than 500 wreaths were placed honoring our fallen veterans.

National Wreaths Across America Day took place that day at 3,136 participating locations across the country.

More two million volunteers, a third of whom were children, helped placed more than 2.4 million veterans wreaths on headstones across the country.

The tradition was started by Maine wreathmaker Morrill Worcester as a gift of thanks. He once again made the trek to Arlington this year to place wreaths as he has each December since 1992.

“When I brought down those 5,000 wreaths that first year, I just thought it was a way for me to say thank you, for what we have in this country,” said Worcester, founder of Wreaths Across America, in a press release.

“I could have never imagined it would strike a chord like it has and make such an impact.”

Each live, balsam veteran’s wreath was a gift of respect and appreciation, sponsored by an individual or organization and placed on a headstone by volunteers as a small gesture of gratitude for the freedoms Americans enjoy. For centuries, fresh evergreens have been used as a symbol of honor and have served as a living tribute renewed annually.

For more information, visit wreathsacrossamerica.org. Next year’s National Wreaths Across America Day will be held on Saturday, Dec. 17. 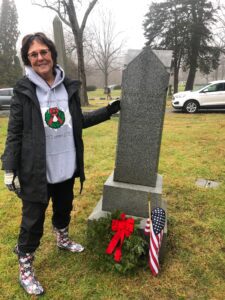 Nature moves to beat of its own drum