Something special is starting to grow at the Orange Johnson House.

The Worthington Garden Club is embarking on the second year of its historical kitchen garden. A small patch of land in the south yard of the historic site, 956 High St., has been designated to host a kitchen garden reminiscent of one tended by Achsa Johnson, wife of Orange Johnson.

“We try to be as accurate as we can with the plants they would have had back then,” said Bill McDonald, president of the Worthington Garden Club. 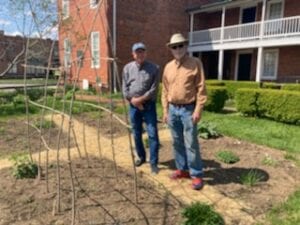 The project is a collaboration with the Worthington Historical Society and the Ohio State Master Gardeners Volunteer Program. It is maintained weekly by volunteers from the garden club and the master gardeners.

The garden is comprised of four quadrants, each featuring plants that would have grown in a kitchen garden in the 1830s. The garden club used heirloom seeds to most accurately replicate the type of plants grown during that period.

The southeast quadrant is dedicated to “the beans, corn, and squash trio that the settlers learned from the (native Americans,)” McDonald said.

Peas also will be planted there.

The garden club constructed a trellis from young sycamore tree branches that were donated by a garden club member.

“When (the one-year-old branches) are first cut, they’re very pliable. You can do a lot of weaving with them,” McDonald said. Branches were placed vertically in the ground and additional branches were horizontally weaved in and out to provide support for the beans and peas that will grow.

The other garden beds include one for greens — such as spinach, radishes and lettuces, as well as sorrel.

“(Sorrel) is sort of like spinach in the sense that when the leaves are young and tender, you can put it in a salad. And when they’re a little bit older and tougher, you can saute it,” McDonald said. “It has a slightly tangy, lemony flavor.”

Another quadrant will host root crops, such as potatoes, rutabaga, turnips, and parsnips, while one will have herbs, such as lemon balm, bee balm, parsley, and chamomile.

The project materialized from an idea while the Worthington Garden Club was approaching its 90th anniversary. As one of the oldest garden clubs in the area, McDonald said they thought it would be fitting to partner with one of the oldest buildings in Worthington – the Orange Johnson House.

The Orange Johnson House is one of the oldest residential buildings in Central Ohio and is maintained by the Worthington Historical Society.

The Johnson family lived in the house from 1811 until the Civil War, McDonald said.

Just past the kitchen garden at the Orange Johnson House’s property border is a wildflower garden, also maintained by the Worthington Garden Club.