Samuel Kiner, president of the Kiwanis Club of Northern Columbus, said one of his favorite parts of being in a service group is seeing the reactions and responses to the club’s work in the community.

Some of his special memories include “the thrill the elementary school students feel when they learn that the books they select at the Book Fair are theirs to keep,” and “the gratification expressed by community volunteers when presented with the Community Support Award.”

Kiner joined Kiwanis “to become more involved with a service organization which focused on helping children and families.” 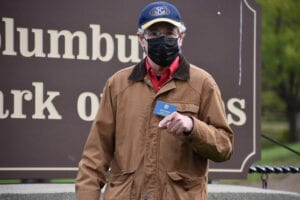 Kiwanis Club President Sam Kiner offers some directions to the dozen or so volunteers on hand for a litter-pickup event at the Whetstone Park of Roses April 24. (Spotlight photo by Cliff Wiltshire)

“I was inspired by a friend, who was also a patient, to join the Newark Kiwanis Club,” he said. “I knew Kiwanis was right for me when meeting kids at Camp O’Bannon, a summer camp for at-risk children, and listening to their troubling personal stories. Newark Kiwanis is a major supporter of the camp.”

Kiwanis International was founded in Detroit in 1915. The organization, which has clubs around the world, is dedicated to improving communities and empowering the lives of children. Kiwanis volunteers build all-access playgrounds, restock libraries, create food pantries, buy medical equipment, host diversity fairs, stuff backpacks with school supplies, and much more.

Locally, the Northern Columbus Kiwanis club hosts and organizes a variety of activities for the community.

The club’s biggest event is the annual Easter Egg Hunt, which is held in the soccer fields at the Park of Roses. The event attracts hundreds of children, who converge on the field and quickly gather up several thousand candy-filled Easter eggs that the club scatters in the grass.

The Kiwanis Club of Northern Columbus also organizes book fairs at Clinton, Indian Springs, Colerain, and Como elementary schools. Books are donated by individuals and other organizations and are sorted by grade level.

“The students come to the library, class by class, and select one book which they keep for themselves,” Kiner said.

The club also donates children’s books to the Whetstone Library in recognition of community members and leaders who have given presentations to the club.

In addition, the club supports the Key Club at Whetstone High School, which is comprised of students who value service to the community.

Other activities the club participates in include sponsoring a North Columbus Intramural League softball or baseball team every year.

The club also works with the Clintonville-Beechwold Community Resources Center and the Worthington Resource Center.

Additionally, the club raises money and sponsors the Northern Columbus Kiwanis Scholarship, a $1,000 scholarship which the club has been awarding annually since 1992.

The scholarship is awarded to graduating seniors from Whetstone, Thomas Worthington, Linworth Alternative, Bishop-Watterson, and Worthington Christian High Schools. Students from other area high schools are also eligible if they reside within the service area of Northern Columbus Kiwanis, Kiner explained.

An additional award, the Community Support Award, is given to individuals who so generously volunteer their time to serve children, adults, and neighborhood agencies.

“Northern Columbus Kiwanis wants community volunteers to know just how much they are appreciated by the residents of the community,” Kiner said.

All those activities might sound like a lot of work for a club president, but the rewards are great, Kiner said.

“Knowing that we are truly making a significant impact on the lives of children, the friendships I have made with fellow Kiwanians, and the camaraderie I feel when working alongside other

Kiwanis members who share the mission of helping not only the kids, but also the community at large,” are all reasons why Kiner said the experience is worthwhile.

“Bob Thompson invited me to join our club when I no longer practiced in Newark and was looking for a Columbus-based Kiwanis club,” Kiner said. “Our club members were so welcoming and appreciated my previous Kiwanis experience. And the range of community activities and projects attracted me.”

Kiner said that when the COVID-19 pandemic hit the club had to make some changes. The most obvious change, Kiner said, is the club’s meetings are, for now, virtual on Zoom. Recipients of the Community Support Award were honored at a virtual meeting.

Kiner said several club events, including the annual Easter Egg Hunt were adjusted to meet guidelines and social distancing requirements. The Whetstone High School Key Club has been inactive because of school closures.

The 2021 edition of the Easter Egg Hunt, Kiner said, “was transformed into an Easter Egg Drive-Through event.”

Outside of the Kiwanis club Samuel Kiner and his wife, Jeannie Sperling, are retired and enjoy attending symphony concerts and visiting the Columbus Museum of Art, as well as hiking and ballroom dancing.

The Worthington residents also find their calendar filled with opportunities to see their grandsons and enjoy their activities: Chase, 18; Cohen, 10; and Coy, 9. They attend baseball and soccer games and, “Hopefully basketball games when more spectators are allowed,” Kiner said.

For more information on the club, visit the web site northernkiwanis.org or call 614-356-7436.